When I was little I used to love looking at our Family Bible, bought by my great-grandfather William Brockbank when he was 21. A few months later he married Ann Clark from nearby Troutbeck, and set up home there, working as a stone waller.

This is the Family Bible that William Brockbank bought as a young man: 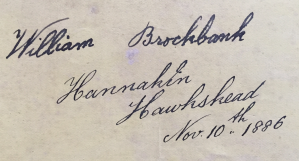 In the front of the Bible are pages to record family events, and I found these particularly fascinating. 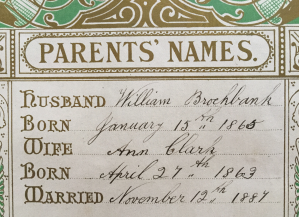 Lots of births are recorded, mostly Brockbanks and then the first grand-children, the Mitchinsons, children of my great aunt Fanny who married Arthur Mitchinson in 1912. Margaret Elizabeth Clark however was born 22 months before her parents married, so had to take her mother’s surname, times being what they were. This is Margaret’s birth certificate, with no father recorded:

When she was about 26, Margaret also had a baby “out of wedlock” – James William Clark – in June 1912. At the time of the 1911 Census, Margaret was working as a ‘General domestic servant’ to the Rigby family in Manchester. Seeing that there were two single young men in the family makes me wonder if one of them was James Clark’s father? James was born at Beckside Cottage, Troutbeck. Known as Jim Clark, he became an insurance broker and married an iron-monger’s daughter from Ambleside called Hilda Martin. They went to London for their honeymoon in 1940 and brought my dad a combination-operated money box, which I also had as a little girl. Saldy Jim died from TB a few years later, and Hilda went on to marry a GI.

My Dad told me stories about his aunt in Saskatchewan, and remembers that at one point she worked as a cook at a logging camp. He remembers a photo of a tin bath suspended from a tree that she would bang when the meals were ready. And another story about how she knocked a hole in the wall of her house because she wanted a window there. She sounds like quite a formidable lady!

Dad told me that Margaret met her future husband on the boat to Canada, and that his surname was Cavell or Carvell. The Family Bible records her marriage as 10 June 1914, but the husband’s name isn’t recorded. I spent a long while searching passenger lists for ships carrying a Margaret Elizabeth Clark and a male passenger by the surname Carvell, both unmarried. There’s a tight window for the sailing – James Clark was born 16 June 1912 and the wedding was 10 June 1914, so I searched on 1913 plus or minus one year.

It was actually more difficult than it sounds because Clark is a very very common name and there were many variants of the spelling of Carvell. In the end I contacted Saskatchewan Genealogical Society for help, sending them all the information I had. I should add that Dad remembers that the couple settled in Nipawin, Saskatchewan and that they had three sons: John, Les and Doug – the younger two stayed at different times with Dad’s family at 8 Whinfield Road, Windermere, during their leave in World War 2. Dad was a young teenager, so it must have been quite exciting to have these Canadian soldier cousins to visit! Here’s a picture of the house from Google StreetView. They would have been new council houses during the war, and my grandparents were able to rent one because my grandmother had been in hospital for a few months with rheumatic fever.

I got lots of information back from  Celeste, the researcher in Saskatchewan, and will start with the 1921 Census, which states that Norman emigrated in 1906, Margaret in 1915 … so Dad’s information that they met on the boat is wrong!

Now that Celeste had found a Christian name and approximate birth year for Norman, I was able to search the England 1901 Census, and found Norman with his two brothers in the Princess Alice Orphanage, Sutton Coldfield, Birmingham.

My cousin on my mum’s side in Minnesota even joined the search! She found Norman Carvell’s timeline on Ancestry. As well as two brothers, Norman also had a sister, Gertrude Hannah Carvell, born 1893. Their mother died in 1899, which I guess was what led to the boys being in the orphanage in 1901. At the time of Norman’s birth, his father John Carvell was a shoe riveter:

Eventually I found Norman’s passage across the Atlantic, and realised why I’d not been able to find it originally: Carvell had been transcribed as Corvell (you can see why from the handwriting below)! My cousin found out that the boys travelled with a friend, M. Yarnel. Using the Library and Archives Canada site, I was able to locate Norman in the 1911 Canadian Census aged 19, working as a Farm Labourer in Tuckersmith, Ontario. I was unable to find his older brother Ambrose, and wonder if he stayed in the USA?

So we have the beginnings of a journey west: arrival Portland, Maine 1905, working in Ontario 1911, married with four sons and working in Moose Jaw, Saskatchewan 1921. The next event is Norman’s homestead application from December 1929. Celeste found this by searching http://www.saskhomesteads.com

Christ Christenson, Harry Henry Wheeler and James William Diamond also applied to homestead this quarter section of land and there is no record of which applicant was successful. Maybe Norman and Margaret’s grandchildren and great grandchildren will be able to help out here!

Returning to the 1921 Census, four sons are listed. My Dad knew about John, Les and Doug, but the youngest son, Norman junior aged 5 months, was a surprise. Sadly this Norman died in 1938 from peritonitis. Celeste sent the account of his funeral from the Nipawin Herald, which also gives an insight into the family taking up land.

The article mentions that Norman William was interred in Woodlawn Cemetery, and Celeste told me that Norman senior and Margaret were also buried there. Photos of two of their headstones had been uploaded to Findagrave.com in May 2018, so I was able to leave a message and a virtual flower.

Celeste also sent obituary notices for Margaret, who passed away in 1973 aged 87, Norman who passed in 1960 aged 69, and their second son Les. I was surprised to find that Les was short for Leicester, Norman’s birth county in England. This article named Les’ six grandchildren, one of whom I’ve now contacted thanks to the marvels of Facebook! 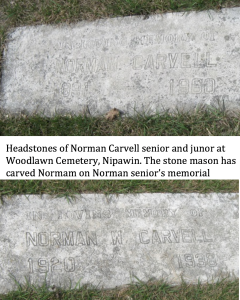 My cousin from Minnesota contacted the editor of the Nipawin Bridge magazine, to get some information on life in a logging camp for dad’s 90th birthday. Norman Carvell and at least one of his sons worked at Botting’s Mill, which burnt down in 1946 and was never rebuilt. Those times were remembered fondly by families in the area, and this extract about a woman’s first impressions made me think of dad’s aunt – tho, from his stories, I always imagine her as a woman of stronger character:

One thing that puzzles me is how Norman and Margaret met, as Dad recalls hearing that they met on the boat, but I now realise this isn’t correct … I’m still looking for Margaret’s emigration details, but because Clark is such a common name, there are a lot of results to trawl through. She almost certainly sailed from Liverpool, but I don’t know if her destination was Canada or the USA. Something to have another look at during the winter …